Searching for the best accommodation in Rome I realized that the X factor is only one: stay somewhere in the city centre as Rome’s underground is not offering much in the city sightseeing. I chose Casa Montani hotel which is just a few steps from every monument you want to see in Rome. An elegant hotel making you feel like you just moved to Rome and you found the perfect apartment.

First thing I wanted to do is to visit Piazza Navona. A beautiful square where you can find many street painters and the three beautiful fountains. Time for my sweet delight. Nothing else than the Tre Scalini’s tartufo.

Tip: Wear a blue suit, shades and the MCM backpack.

The next stop was the famous Pantheon on Piazza della Rotonda. Almost two thousand years after it was built, the Pantheon’s dome is still the world’s largest unreinforced concrete dome. Have lunch in the traditional Italian restaurants on the piazza. The food is a bit touristic but the feeling eating next to the Pantheon will compensate you. For dessert I suggest cannoli stuffed with pistachio cream from the little ice cream stores nearby. 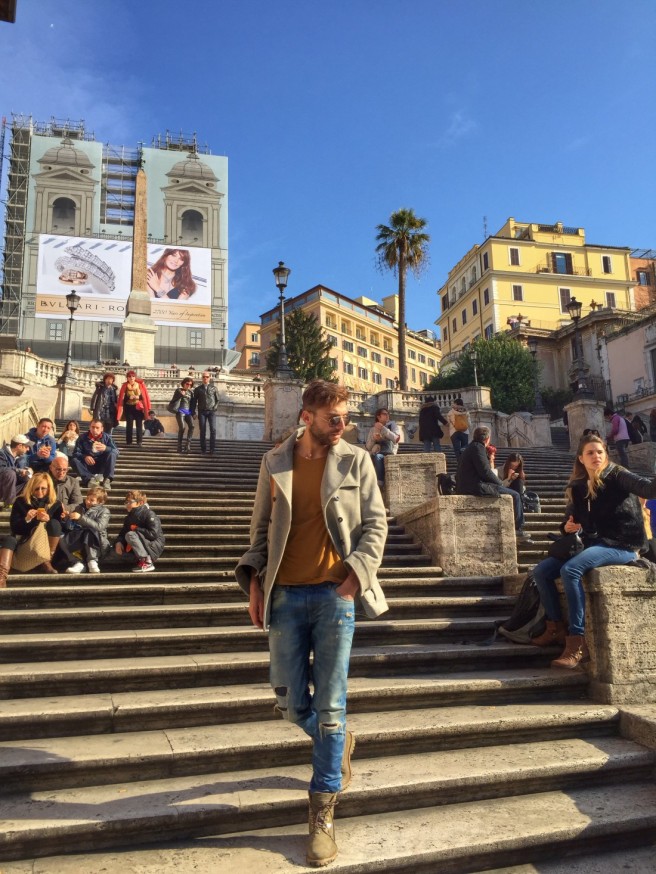 In the afternoon take a walk to the famous Spanish steps at Piazza de Spagna. Watch the perfect sunset and mingle with the people. Everybody is sitting on the steps talking, laughing, socialising and maybe by the time the sun sets… some of them will become friends. That’s just Rome.

At night go to Trastevere area. On your way there make a stop to admire the illuminated Castel Sant’Angelo. At Trastevere, everyone is out on the streets drinking and partying. Don’t worry if you get hungry after all the shots you had. You can find trattoria Toscana da Gustare open till the early morning hours.

The next morning I went to Colosseum. When you go there take the road through Piazza Venezia and the ancient Roman forum. Explore the glorious Colosseum which is the largest amphitheatre ever built and is considered one of the greatest works of architecture and engineering. Exploring will definitely make you hungry!  Not far from Colosseum is Piazza Madonna Dei Monti. You ‘ll find nice restaurants there for lunch. After lunch, time for shopping at Via del Corso. This road will also lead you to Piazza del Popolo. Rest there, enjoy an aperol spritz and off to one of the most visited monument of Rome… Although I have seen Fontana di Trevi before I wasn’t very happy when I saw that this time was under reconstruction.

The next morning I woke up at 7! I was in a rush to get to Vatican city before the buses full of tourists arrive. That’s the best tip you can give to someone who is travelling to Rome. The line at the entrance is huge if you won’t get there early. The St. Peter’s Basilica is outstanding. There are many steps to the top of the dome but the view of the city from up there is breathtaking. After my visit to the Vatican I took a beautiful walk along the river to the Castel Sant’Angelo. You can visit Campo de’ Fiori where there is a grocery open air market. Buy fresh pasta in all shapes and colours and some beautiful flowers. After all, flowers are the reason they gave the name Campo de’ Fiori to this Piazza.

View all posts by Simon Sava

WHO WE’ VE WORKED WITH